The Maud Couple vs Maud Pie: How to Pull Off “Hidden Gem” Plots

My first pithy little reaction to the episode “The Maud Couple” was essentially “Maud is dating Sheldon Cooper now and we got to deal with it”. Feeling the need to elaborate on that more, however, is what has finally motivated to actually write out an episode review, something I haven’t done since the Season 6 Finale “To Where and Back Again.”

Look, PhD programs don’t leave a lot of time to write pony episode reviews. But nothing tends to get my urge to analyze something going as much as a show attempting to make the audience have to like or tolerate a character without actually putting in the work. That is, essentially, the major flaw I have with the episode “The Maud Couple” and is what makes it an ultimately inferior episode to its most easily comparable one, “Maud Pie”.

END_OF_DOCUMENT_TOKEN_TO_BE_REPLACED

Is Starlight Glimmer a Communist?

The moment I saw the trailer for the Season 5 premiere of My Little Pony: Friendship is Magic, I figured I was going to have to do a post like this. A villain goes around talking about equality and everybody being the same? In the culture of the United States, with its histories of “Red Scares” and the Cold War behind it, this sort of rhetoric immediately equates to “communism” or “socialism”, whatever word you pick. But is Starlight Glimmer, the antagonist of the two-part premiere, really supposed to be a representation of actual communist thought? In this article I’ll be giving what basically amounts to a brief “Marxism 101” lesson as we investigate Starlight Glimmer’s philosophy.

END_OF_DOCUMENT_TOKEN_TO_BE_REPLACED

For Great Justice!: Retributive vs Consequentialist Justice in Equestria

Is it possible that Equestrian society is too forgiving of crimes? Or maybe the situation is that Equestrian society simply views justice differently? In this article I explore the question of what kind of justice does Equestria seem to favor. Does it favor retributive justice in which criminals are punished because they deserve it? Or is it more consequential, favoring the use of rehabilitation and isolation to advance some kind of societal goal?

END_OF_DOCUMENT_TOKEN_TO_BE_REPLACED

Season 4 has come and gone, leaving us with this two-parter dubbed “Twilight’s Kingdom.” Instead of a reaction ramble, I went through and picked out six things in particular I wanted to talk about. Check in below to see just what I thought of this season’s finale.

END_OF_DOCUMENT_TOKEN_TO_BE_REPLACED

Everyone knows that Fluttershy loves animals taking care of them is her special talent after all. But does the episode Bats! suggests that she might have a lot in common with preference utilitarian Peter Singer? In this article I will attempt to argue that, like Peter Singer, Fluttershy is acting on the belief that animals deserve equal moral consideration when decisions have to be made.

END_OF_DOCUMENT_TOKEN_TO_BE_REPLACED

I did one anyway
Mysterious Mr. Enter Review of “Filli Vanilli”: http://www.youtube.com/watch?v=TjC-9UffJtg

Where I state that Discord is an emotionally manipulative jerk.

Gallop Poll: Commissioned from a Friend 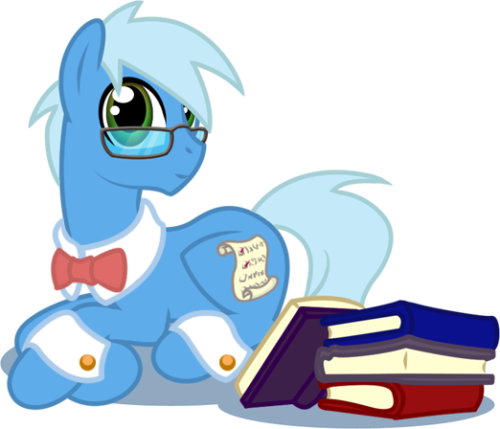 So here’s another drawing of my ponysona, Gallop Poll. This time not vectored by me, however, but drawn my talented friend Coffee, who does not have a deviantART account but has given me permission to post it on my own ^_^. Won the right to this awesome image back in our Nightmare Night Contest on “The Fun Has Been Doubled!”, the MLP Roleplay forum I run (with Coffee as co-admin).

Might take this (or the version she made without the books) and make a new header image.