Episode Reaction: To Where & Back Again – MLP Season 6 Finale 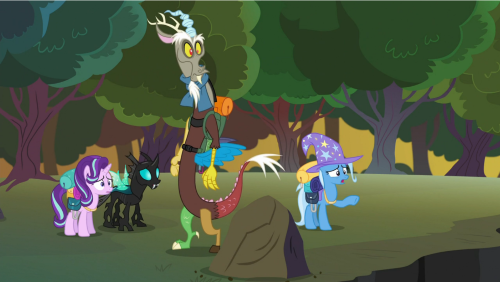 It’s been a while since I’ve done a reaction/review-ish piece for an MLP episode. While there have been episodes of MLP I’ve thought good, I never really got the same sort of spark for wanting to say something about them as I’ve done in the past.

Part of it is burnout for sure, and of course graduate school isn’t exactly known for giving you free time. But a lot of it was honestly just didn’t feel like the show or was offering much that I could work with as someone whose main interest is getting at it from a background in political science and ethics/political theory perspective. Sure, the return of the best background character ever, Trixie, in “No Second Prances”, got me excited, but didn’t exactly give me room to ramble on about introductory Marxist theory like Starlight Glimmer’s first episodes or the countless articles I’ve done on utilitarianism.

But seriously though, this episode alone would have been enough to make the season for me.

Fortunately for me then it appears the somewhat contentious season finale –at least from some initial reactions I’ve seen – finally gives me a chance to dig out the old MLP analysist in me. Because if there is anything that gets the urge to ramble on about something, it’s controversy. So let’s dig in to “To Where and Back Again”, and what the conclusion of the two-parter says about the nature of the MLP Universe.

Can a Changeling Change? 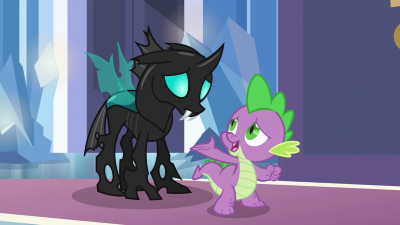 Of course, before we talk about that conclusion, we gotta go back a couple of episodes. In the “Canterlot Wedding” two-parter we were introduced to Queen Chrysalis and her race of shapeshifting insect-like creatures known as the Changelings. The Changelings feed on love, and Chrysalis’s methods of getting it usually involved infiltration through replacing loved ones with a Changeling, hypnotic mind control, and the outright invasion of Canterlot after replacing Princess Cadence.

In short, the Changelings were presented as an inherently sort of “evil” race: they looked ‘ugly’ and weird compared to the world we knew, the power of shapeshifting has always been associated with trickster figures, and of course kidnapping princesses and invading cities in order to drain the citizens of their love is a pretty evil thing to do. The only method of dealing with them was the same as some of the other characters that were presented as inherently “evil”, like Discord before them and Tirek and Sombra after: their removal.

By season 6 of course Discord was freed and on the path of reform (see my two-part article on that), leaving Chrysalis, Tirek, and Sombra the only unreformed antagonist. Neither Tirek nor Sombra, though, represent a deterministic view of good and evil: Tirek’s brother showed an alternative path, and Sombra was just a powerful unicorn. Essentially, then, by the time Season 6 rolled around Changelings remained the only real example of a inherently ‘evil’ race in the series.

Cue the episode “The Times They Are A Changeling” and the character Thorax, a rogue Changeling who ran off after the invasion and wants to be accepted by pony society. Spike befriends him, sings a song standing up for him in front of Cadence, Shining, and a crapload of guards who had shown hostility towards Changelings for obvious reasons (plus extra reason of baby filled with love to protect), and we all get a nice lesson about how friends can come from anywhere when the ponies learn to accept Thorax.

But there’s a problem with the episode. Spike, in his song, emphasizes the line “Why can’t we imagine a changeling can change?”, and the title itself implies a change has occurred. But, Thorax never changed: he even states that he was ‘born different’ somehow, having always wanted a friend since the moment he was born. The imagery in the backstory is telling; he is small, scared, whimpering while the other Changelings are vicious and hissing. The truth is, then, that Thorax never changed: he was born good, and his being born good was simply an error in a race that is otherwise evil. It is, quite frankly, a rather deterministic position to take on the nature of who is capable of being good and evil. 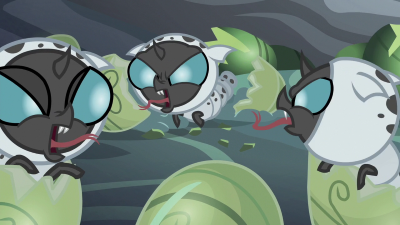 To Where and Back Again

This brings us to the finale, which involves Starlight Glimmer and a team of Discord, Trixie, and Thorax infiltrating the Changeling Kingdom in order to rescue the Mane 6, the Princesses, Shining Armor, and Flurry Heart. In the climatic scene, Starlight Glimmer and Thorax face own Chrysalis. Starlight, drawing upon her own experiences of being a dictorial ruler with mind control magic, attempts to argue that there has to be a better way for the Changelings than Chrysalis’s rule through fear and intimidation. Chrysalis points out there is still the issue of feeding, which is where Thorax comes in, noting he hadn’t really felt the need to eat for ages now and offers to share his love with the other Changelings and Chrysalis.

The result is a transformation of the Changeling race, except the defiant Chrysalis, into beings who share love instead of consume it. They also get a new paint job, which I’ll leave you all to determine if it is good or not.

To quote a friend: it looks “…like something Willy Crack-is-Whack Wonka would make”

Questionable designs aside, the result of the finale, then, was to “redeem” the Changelings by changing their nature so they no longer have to rely on stealing love to survive but can instead produce it themselves by sharing love with one another.

Now, I can understand how taking one of the popular antagonist races and removing them as antagonists is rather controversial. As some reactions I’ve seen have argued, it basically removes the point of their existence. My main response to that is: what show have you been watching?

As I argued in my post “For Great Justice! Retributive vs Consequentialist Justice in Equestria”, justice in Equestria is more towards redemption and rehabilitation over punishment (note: as some readers since then noted there is also “restorative” justice). Season 6 itself has placed redemption and changing for the better as the primary theme. The central example of this was Starlight Glimmer’s personal storyline, which was driving even the finale as she learned to trust in herself and that she had changed. But even other characters got to have a go at it: Gauntlet of Fire offers redemption for the dragons to be more compassionate and friendly, A Hearth’s Warming Tail is basically MLP Christmas Carol, Flutter Brutter involves Fluttershy’s lazy brother learning to be independent…okay, Viva Las Pegasus doesn’t really redeem the Flim Flam Bros. but it does at least show their talents can have positive uses, and there are of course the continuing adventures of Discord learning to not be a butt (still WIP). 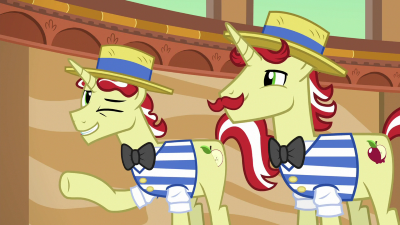 The point is, redemption and change was a central theme throughout the season, so it’s no surprise it is front and center of the finale. Much of the reason for this focus on redemption and change comes down to one, simple fact: My Little Pony is, essentially, a universe of good. What I mean by that is that MLP is, at it’s a core, a show where friendship and love are forces that shape the world and hold great power. Bad things happen, but they can be beaten if needed, and not through force but through working with and empathizing with one another. Enemies can become friends if one simply reaches out with understanding, compassion, and forgiveness. Sometimes, yes, they may reject it: Trixie running from town, the Flim Flam Bros. still being capitalistic con-men, and of course Chrysalis showed that in the finale. But making the attempt is seen as the right thing to do regardless, and more often than not it succeeds.

The existence of a purely evil race is, quite frankly, antithetical to such a world. In a world where friendship and love can change even a being dedicated to chaos into someone tolerable, a race like the Changelings as originally presented simply should not be. And it should not be not because it’s wrong for there to be ‘dark’ things – though again the fundamentally positive and good nature of the show would suggest such things should not be for long – but that the larger thematic messages of MLP reject the deterministic implications that “A Canterlot Wedding” and “The Times They Are a Changeling” have in regards to the nature of the Changelings. The existence of a deterministic evil race undermines the larger themes of MLP by suggesting that in part whether an individual is capable of being ‘good’ is based on birth, not the choices they make and the efforts they put in to understand and relate with others.

Where I might put some complaints in the finale is that the decision to give the Changelings a makeover as part of their redemption plays a bit into the “ugly is bad/beauty is good” trop (for, again, your various definition of ‘beauty’). And that they needed to be ‘changed’ still has some deterministic implications. I think it may have been more interesting that they remain the same in appearance but otherwise able to share love with one another to fulfill their needs. And I think it would be really interesting to see in future episodes interaction between Changelings and ponies. But the decision to redeem the Changelings and give them the opportunity to make the decision to be ‘good’ (Thorax) or ‘evil’ (Chrysalis) is, I believe, more in line with the thematic story that MLP is trying to tell and push for. To suggest that the Changelings are “ruined” by no longer having “purpose” because they are no longer an inherently evil race is, I think, to misunderstand the central themes of the show.

Note: This not here just because Starlight & Trixie are best duo ever, but also two former antagonists being best friends and supportive of one another Grade A example of the point being made.

2 responses to “Episode Reaction: To Where & Back Again – MLP Season 6 Finale”